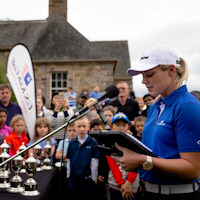 In light of these achievements, Zoe was nominated in December 2017, for a US Kids Golf Top 50 Coach award. Each year, US Kids Golf select 50 of their coaches for special recognition.  Zoe will be only one of five coaches from outside USA to receive the award.

Zoe became the first Irish Teaching Professional to qualify as a US Kids Golf Coach. This enabled her to introduce US Kids Coaching methods and Learning Programmes to Lurgan along with her other coaching classes. To date, Zoe has had a great response with the US Kids Level 1 programme now running for a third time and the Level 2 award running for a 2nd time.

The next step Zoe is taking is to introduce US Kids Golf Tournaments to Ireland. Zoe, with the help of Lurgan Golf Club and support from Allen Park Golf Centre, Ardglass, Ballycastle, Galgorm Castle and Shandon Park, has created the US Kids Golf “North of Ireland” Local Tour. The North of Ireland Local Tour comprises a series of six events during April and May 2018 including a “Tour Championship” which will be held in Lurgan.

Zoe will receive the award at a ceremony held at the annual PGA Show in Orlando, Florida at the end of January.

Next US Kids Events